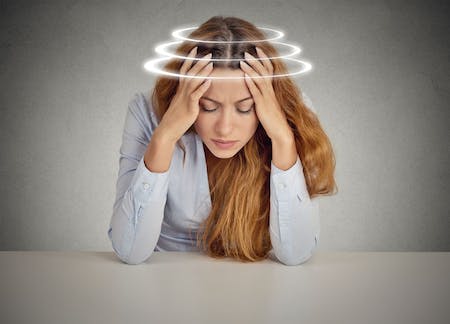 Dizziness (vertigo) is the sensation spinning or turning even when you're not. The word come from the Latin word "verter", which means "to turn", and the English word "whirling". This feeling may be anything from barely noticeable to severe enough to make it difficult to maintain your balance and do everyday tasks. The feeling may also be accompanied by:

Disequilibrium is the sensation of an impending fall or the need for external assistance to maneuver from here to there. Some people describe a floating sensation or that the floor or room appears tilted.

Doctors often categorize vertigo causes into two groups, according to whether the site of the problem is in the central nervous (brain) or the vestibular (peripheral) system. Thus, vertigo may be caused by certain parts of your brain (cerebral cortex, cerebellum, brainstem):

Sometimes, it may even be caused by a fever, ringing in your ears (tinnitus) or even hearing loss.

Vertigo usually occurs when tiny particles, called otoconia, in the utricle (part of your inner ear) break loose and fall into the semicircular canals (other parts of your inner ear). The most common treatment for this problem is called the Epley Maneuver, a maneuver used to treat benign paroxysmal positional vertigo (BPPV) of the posterior or anterior canals.

It works by relocating the free-floating otolith crystals from the affected semicircular canal(s) back into the utricle, using gravity. This provides relief for many BPPV sufferers because the particles are no longer stimulating the cupula - the part of your vestibular system that provides the sense of spatial orientation. A few people may need subsequent treatments. Talk to your physical therapist if your symptoms don't improve.

Other causes of balance problems can include:

Contact us today if you are experiencing dizziness or balance problems.